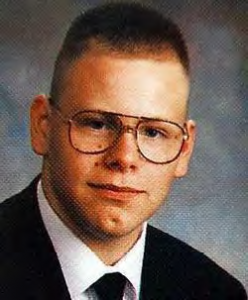 CANTON, Ohio — When an Ohio soldier killed in Iraq was once asked as a third grader what he wanted to do when he grew up, he wrote to his teacher: “I’ll go to war and fight.” “The teacher called and was a little alarmed and I said, ‘No, that’s my son,”’ recalled the mother of Army Staff Sgt. Richard Ramey, Julie Ramey.
Photos of Ramey in his uniform and of his 1995 graduation hung on a wall and a mantle of the Rameys’ home. Next to it was a graduation photo of his younger sister, Sarah. “It’s going to be tough, but we’ll get through it,” Jerry Ramey said.
Julia Ramey said she and her husband were proud of his service. “Richard loved to do his job. No matter where it would take him,” she said. “He really felt deeply that he wanted to protect people that couldn’t protect themselves.”
In a statement released through Fort Knox, the family said, “He was adventurous and smart, combining both qualities in what he did for the Army. We knew his work was dangerous but also knew he wouldn’t have wanted to do anything else.”
Bob Kilpatrick, who had Ramey in his English class, said Ramey was “a solid kid who worked hard and tried to do as much as he could right.”… Ramey played offensive guard with the Perry football team and was a teammate of Kilpatrick’s son. Ramey looked forward to his military service, according to Kilpatrick, “not to get his college paid for. He actually wanted to serve.”