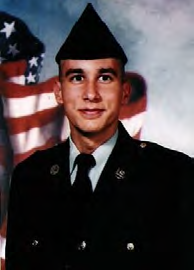 HAMILTON — Fellow servicemen of Sgt. Anthony Vinnedge said they remembered the soldier for his ability to deliver humor in stressful situations. But the same men who once laughed with Vinnedge fought back tears at his funeral Saturday.
“He was an outstanding soldier,” said Capt. Devin A. Braun, who was Vinnedge’s riding partner during his training with the Ohio Army National Guard. “He left an impression. You serve with thousands of soldiers, but a few really stick with you.”
Family, friends, members of the military and Ohio Sen. Gary Cates attended the service Saturday at the Hamilton Christian Center. Outside, scores of Patriot Riders Guard members stood with flags. Inside the church was a chronological photo display which featured pictures of Vinnedge smiling as a “perfect speller” award winner in the second grade and “Athlete of the Week” at Talawanda High School. The final photo depicted Vinnedge in his military uniform.At the service, Vinnedge was described as a funny overachiever who served as a mentor to younger soldiers. Braun said Vinnedge’s dedication could best be described by the Army’s Warrior Creed, which reads “…I am a guardian of freedom and the American way of life, I am an American soldier.” “I cannot think of better words to describe Tony,” an emotional Braun said. “He died doing what he loved and in the noble pursuit of serving others.”
The Rev. Johnny Sloan praised the strength of Deborah, and urged members of the community to continue to support the family. “Tony saw a good soldier, (he) was a good soldier because (Deborah was) a good soldier, ” Sloan said.
The community displayed its appreciation for Vinnedge’s service, as Hamilton residents, business owners and firefighters lined the streets from the church to Greenwood Cemetery to pay their respects. Throngs of mourners cried at the cemetary as the American flag was taken from the casket and folded by the Honor Guard into a triangle before being presented to Vinnedge’s weeping mother.
Vinnedge’s colleagues say his loss will be felt long after the ringing of two shots and the playing of taps.
“He was just a good-hearted kid, fun, and brought a lot of skills, knowledge and ability,” said Sgt. Maj. Steve Shepherd, who served with Vinnedge in Iraq. “He was truly a warrior. This is a great loss for us all.”