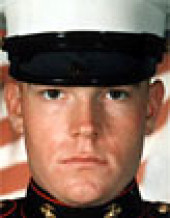 Greg Roth, a social studies teacher at Falls High who was Walsh’s Advanced Placement U.S. History teacher, said Justin had talked about going into the Marines from the time he was a freshman.
He said Walsh had a great sense of humor but a serious side as well.
“He seemed to know what was important and what wasn’t,” Roth said. “You’re talking about a fantastic young man — and I would have told you that two months ago, as well.”
Don Ross, now an assistant superintendent in Stow, was Walsh’s head football coach for four years at Falls High. He called Walsh “extremely hard-working.”
He said Walsh, an offensive and defensive lineman, “wasn’t your biggest lineman” but he made up for the lack of size, “with hustle. He always had a tremendous attitude and always had a smile on his face. He was a great kid.”
Ross said as a football coach, “you don’t remember all your players, but he was one of those players that you always remember.”
Brian Yelling, 40, a medical equipment technician from Cuyahoga Falls, had known Walsh for only a year, but said he “had every opportunity to do other things in his life, and he chose to do this. There aren’t many kids who want to be a bomb specialist, especially with the Marines.”
Even as he and his family are preparing for the funeral of his son, Jim Walsh said Americans should not just think of those who have died in the war but remember that thousands are being wounded as well.