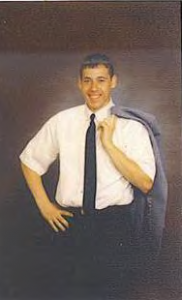 Gavin Neighbor couldn’t wait to join the Army, joining the long list of relatives who had served their country in the military. His parents supported that decision, even after they received the news that Neighbor had died June 10 in a grenade attack in Baghdad.

“He loved making me proud,” stepfather Willie Neighbor said while clenching a plaque that his stepson sent home after he earned his paratrooper wings. Members of Neighbor’s family had served in the military in World War II, Korea and Vietnam.

“Gavin was the first family member who didn’t get to come home,” said an uncle, Mike Bonham.

His mother said he was prepared to go overseas and eager to serve his country. “He loved what he was doing. He wouldn’t have given it up for nothing,” she said.

Neighbor, a 2001 graduate of New Lexington High School, wanted to make the military his career and eventually hoped to join the elite Army Rangers, his parents said. Neighbor had proposed to his girlfriend, Rachel Sanderson, before leaving for the Middle East.