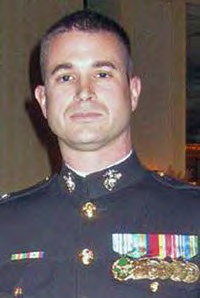 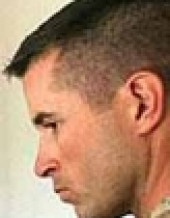 U.S. Marine Captain Tyler Swisher craved challenges that others shunned. His arduous training in Korea for mountain warfare involved climbing steep, rocky slopes and living outdoors in the harsh elements. “It was miserable,” recalled his fellow Marine and close friend, Captain Gary McCullar. “He loved it. “Swisher’s family and friends laughed knowingly when McCullar told that story Tuesday at Swisher’s funeral at the Crossroads Community Church in Oakley.
From the time he was a skinny, 100-pound football player at Mariemont High School through his third tour of duty in Iraq, Swisher pushed himself beyond the norm. “Tyler never faltered,” McCullar said. “He always did it right.”
Swisher, 35, was killed Oct. 21 by a roadside bomb in Iraq. The Mariemont native will be buried at 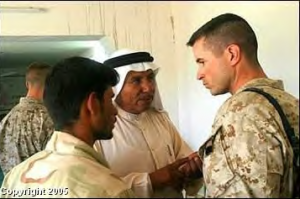 Arlington National Cemetery on Thursday. He leaves his wife and three children. The family lives in the Camp Lejeune. N.C., area. His also leaves his parents, a brother and a sister.
Swisher graduated from Butler University in Indianapolis in 1993.
Swisher, who grew to be 6-foot-2 and 210 pounds, enlisted in the Marines 12 years ago. “He gave everything he had so that everyone he loved and his fellow Americans could live free from fear,” said Army Brig. Gen. Jeff Foley, also a Mariemont High School graduate. Foley, who is older than Swisher, had never met him. But he said he learned a lot about Swisher by talking to family members, friends and his fellow Marines over the past three weeks. Swisher was an unselfish person who always placed the needs of his family, his friends, the Marines he led and his country above his own, Foley said. “It was never about him,” Foley said. “Wars are fought by many. But they are won by men like Tyler.”