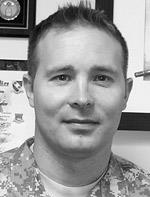 AKRON, Ohio — AKRON, Ohio — Capt. Joshua Michael McClimans, 30, of Akron, Ohio, and formerly of Jamestown, died Friday, April 22, 2011, at Forward Operating Base Salerno, Khost Province, Afghanistan.
He was born May 12, 1980, in Greenville, Mercer County, the son of Michael L. McClimans of Jamestown and Cindy S. (McElhaney) McClimans of Harlingen, Texas. He was formerly married to Amanda Mowen of Akron.
He had most currently been employed as a nurse in the U.S. Army.
He was a member of Jamestown Presbyterian Church.
Josh was a 1998 graduate of Jamestown High School. While in school, he was active in wrestling, baseball, and cross-country, and was the recipient of the Merle Higgins Award for Outstanding Leadership during his senior year.
He graduated from Akron University in 2003 with a degree in nursing.
He enjoyed hunting, camping, and riding four-wheelers. He coached pee-wee football and wrestling with his son, Max, and during visits to Jamestown, he enjoyed golfing with his son and with his father.