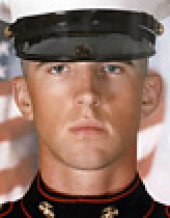 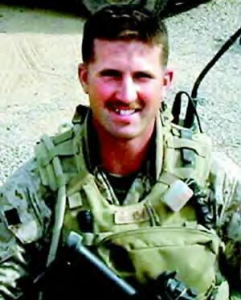 Growing up, Smykowski was a good-looking guy, his mother said, and he knew it. “He was full of himself,” she chuckled. One day in his senior year in high school, at a college and career fair in Mentor, Ohio, Ross watched the erect bearing of two Marine recruiters. “Couldn’t you just picture Mark in that uniform,” she joked to her husband. By the time they got to the table, he’d signed up.
After boot camp, he got endless ribbing from his younger brothers when he was chosen to be a model for the Marines. Soon, he was off to special training courses and classified combat missions. He and a friend inspired their younger brothers and friends to join the military. They became known as the “Mentor Seven.” All but one came to the funeral yesterday. 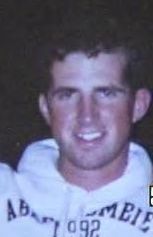 In Iraq, the children called him “Mr. Ski.” He became an ambassador of sorts to the locals. “His unit would laugh that Mark’s name would be on the ballot during the local elections,” Ross said. Recently, he had been distributing toys and clothes to Iraqi children, she said.
“He was loving and easygoing,” Ross said. “I have all these pictures with his arms around Iraqis. There was one where he had 25 kids all around him.”
Ross spoke with her son for the last time nine days before he died. He was telling her how bad things had gotten. “Mark,” she remembered asking him, “are you scared?”
“Uh, yeah,” he said sarcastically. She tried to bolster his confidence. Then she asked, “Mark, are you okay with God?”
“Mom, you don’t have to worry,” he said. “I’m good to go with God.” …