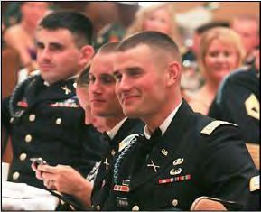 RUNYAN 1LT MICHAEL L. RUNYAN, 24, of Newark, OH., died Wednesday, July 21, 2010 in Balad, Iraq while serving in the U.S. Army. He was assigned to the 52nd Infantry, 2nd Stryker Brigade Combat Team, 25th Infantry Division, Schofield Barracks, HI. He was born on Nov. 29, 1985 in the town of Ashland, OH., to Jeff and Renee (Rebera) Runyan. He graduated from Ashland High School in 2004 where he was a qualifier for the State Golf Tournament his junior year. He participated in the Army ROTC program at Xavier University and earned his Bachelor of Science degree in criminal justice in 2008. While at Xavier, he was a member of the Society of Pershing Rifles and participated in Ranger Challenge, serving as Captain of the team his senior year. He also participated in intramural sand volleyball, a championship softball team and was in the Xavier musical his senior year. Michael loved golfing, tennis, exploring the outdoors and most of all, his family and friends. Michael had the God-given gift of a smile that lit up the entire room. He touched everyone he met with his charm and grace. He is survived by his parents, Jeff and Renee of Newark, OH.; sister and brother-in-law, Lesley and Matthew Hess of Beavercreek, OH.; brother and sister-in-law, Alex and Brittany (Eilenfeld) of Oceanside, CA.; fiancée Shaina Cales of Ripley, OH.; and other loving family and friends….