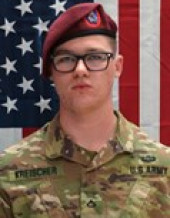 The Army has identified the two U.S. soldiers killed in a reported insider attack Monday.

The paratroopers died from wounds sustained in a “combat related incident” in Tarin Kowt, Uruzgan Province, according to a Pentagon press release.

“These young men were true All Americans and embodied the qualities of selfless service and courage as they answered our nation’s call to deploy to Afghanistan,” said Col. Arthur Sellers, commander of the 3rd Brigade Combat Team, in a division statement.

“Our focus is now providing their loved ones with every available resource to help them in this most difficult time,” Sellers said.

The incident remains under investigation, officials said, but the Associated Press reported that an Afghan soldier shot and killed the two U.S. troops in Kandahar. The Afghan soldier was wounded and is in custody, according to the officials.

Nance joined the Army in January 2017 and Kreischer joined in June 2018.

Nance was an automatic rifleman, while Kreischer was a rifleman

Both soldiers’ awards and decorations include the Purple Heart, the Bronze Star Medal, the Army Service Ribbon, the Afghanistan Campaign Medal, the Global War on Terror Service Medal, the Combat Infantryman Badge and the Basic Parachutist Badge.

Kreischer is survived by his wife back home in Fayetteville, the large community surrounding Fort Bragg.

Nance is survived by his mother and father in Illinois.