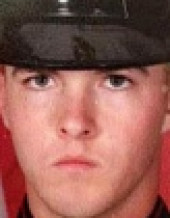 CINCINNATI — More than 200 people attended the funeral of a 25-year-old Marine from southwest Ohio who was killed this month in Afghanistan.

Funeral services for Sgt. John P. Huling were held Tuesday at St. Michael the Archangel Catholic Church in the Cincinnati suburb of Sharonville. The Middletown Journal reports that hundreds of students from an adjacent Catholic school lined the street outside to meet the funeral procession.

The Pentagon says the West Chester man was killed May 6 by a person wearing an Afghan National Army uniform.

His burial will be later this week at Arlington National Cemetery in Virginia.

…He grew up in West Chester, attending St. Michael School in Sharonville before continuing his private Catholic school education at Moeller in Montgomery.

After Moeller, he worked as a kitchen manager at Manor House in Mason and enrolled in Cincinnati State and Technical Community College, where he attended culinary school, his mother said.

But a year later, he still felt his life was missing something, so he joined the Marines. Like his younger brother, Sgt. Huling also was inspired to serve his country in light of the Sept. 11, 2001, terror attacks, his mother said.

“He just out of the blue surprised us,” his mother recalled. “He wanted to join the service to have more discipline and also to serve his country. I am so proud of what he became, what he stood for, what he endured.”…