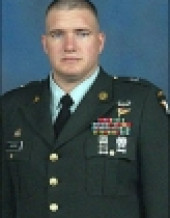 …The 16-year Army veteran was a 1993 graduate of Margaretta High School. Adkins left behind his wife, Sarah, and five children…
“His dad goes to church with us,” Kinney said. “It’s such a sad thing. That was his only child.”
Kinney said Adkins was nearing the end of his military career.
“After he came back from over there he was going to retire,” she said.
“He went to school here, graduated here. He was a hometown boy,” Kinney said…
Austin Riley, a 14-year-old Margaretta High School student, stood on the curb somberly with his mother, Michele.
“I’m here to pay my respects,” he said. “I really appreciate what he did for us, sacrificing his life and everything.”
His mom, who graduated from high school with Adkins, said he was a great guy.
“Always smiling,” she said. “He was an all-around great guy. He loved basketball.”…
As Fields stood, hugging his weeping wife, he said Adkins died trying to help others.
“He died with honor,” Fields said. “Saving people when the bomb went off. That’s what we were told.”
Fields said more than a few people are upset by his death.
“One thing about Chuck, make sure you put this in there,” he advised, “his smile. To say he will be missed sorely is an understatement.”