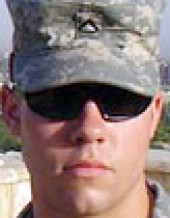 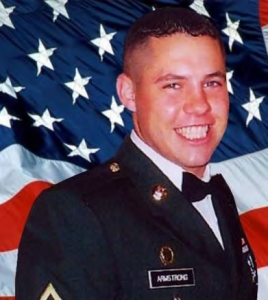 ZANESVILLE, Ohio — An Ohio soldier killed in Iraq when the Humvee he was riding in overturned in a ravine loved sports and wanted to go into law enforcement, his uncle said….
Scott Armstrong said his nephew played football and baseball in high school, practiced karate and loved to ride motorcycles and four-wheelers….
Scott Armstrong said his nephew joined the military because it promised the education he needed to go into law enforcement. He loved animals, including his dogs Bo, Razor and Gage, and wanted to be a law enforcement canine handler.
David Armstrong, who was assigned to the 372nd MP Battalion, 57th MP Company, left for Iraq in June of last year. He was scheduled to return on leave this week and to finish his tour in June.
Scott Armstrong said the family had put off celebrating Christmas, hoping to include his nephew when he visited home.
David Armstrong was married to his high school sweetheart, Tasia Warne, his uncle said.
“David was a very special young man with a bright future ahead of him,” Scott Armstrong said. “Everyone is devastated by his loss. He is sadly missed by his entire family and many, many friends