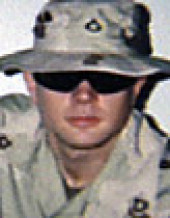 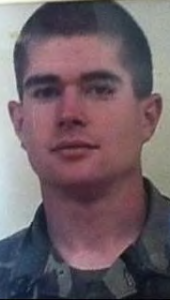 COLUMBUS, Ohio — An Ohio soldier died Friday when the Humvee he was riding in was struck by a roadside bomb in Iraq, family members said Saturday.
Pfc. Robert Swaney, 21, told his aunt in a phone call last Sunday he feared he wouldn’t be coming back from Iraq alive. “He said it was getting real dangerous, and he was starting to get depressed,” Angie Denes said in a telephone interview. Denes said Swaney also was distraught after learning he killed his first Iraqi insurgent since being deployed to the country in April. Swaney, of Columbus, graduated from Marion Franklin High School. He loved football and wanted to be a nurse after being discharged from the Army, Denes said…
Shortly after graduation Swaney moved in with Denes and her husband, Joe. He lived with them until he enlisted in the Army in August 2004.
On leave in October, Swaney eloped to marry Alexandria Swaney. Reached at their Colorado home, Alexandria Swaney said she didn’t want to talk at this time.
Swaney’s 8-year-old cousin, Riley, received the last letter that the family has seen from Swaney, his aunt said. “I wish I was home right now; this is not a safe place,” the letter read. “However I return your cousin Robert will be a hero.”