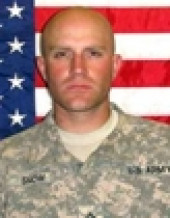 …Snow, a 2003 Fairborn High School graduate and one of six children, was a radio telephone operator assigned to the 1st Battalion, 327th Infantry Regiment, 1st Brigade Combat Team, 101st Airborne Division (Air Assault). He was deployed in May 2010. He died just before he was scheduled to return home for rest and relaxation.
John Snow said Jesse was determined to join the “Screaming Eagles” after watching the 2001 HBO miniseries “Band of Brothers,” which was based on the division’s World War II mission in Europe. “He saw something in the ‘Band of Brothers.’ He loved his family, but it wasn’t fulfilling enough. He had to have something else. He had to have a purpose in life,” John Snow said.
“What I want everyone to realize is that Jesse did great and heroic things, 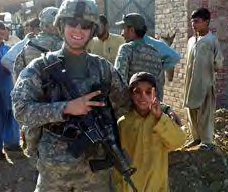 but for every second that Jesse was alive that day, these men were right alongside him, keeping him alive so he could do heroic things,” said John Snow as he recognized members of his son’s platoon, known as BUKA, based in Fort Campbell, Ky. “You were his true band of brothers, and I love each and everyone of you.”
Jesse Snow’s younger brother, Army 2nd Lt. Alex Snow, recently joined the 101st Airborne…