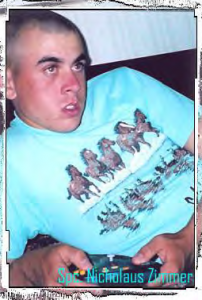 …A two-star general sat near a West Side skateboarder with a pierced lip in the First Unitarian Universalist Church. And there were at least as many tattooed, leather-vested bikers in the crowd as there were businessmen in dark suits.
“Americana is what it was,” Zimmer’s grandmother, Dottie Zimmer, said of the service. “This is the way we would like it to stay: all kinds of people from all walks of life mingling together.”
Her 20-year-old grandson was a melting pot all by himself. Voted “most unique” by the Class of 2002 at Westland High School, he was a punk-music fan who dyed his hair and questioned authority his whole life, but read Shakespeare and joined the military when he turned 18. He was sent to Iraq as a tank driver…
…As recently as last week, Jackson hadn’t quite understood why Zimmer had enlisted. To “blow stuff up” is what Zimmer had told him. Something about the funeral, though, the salutes, the traditions acted out, helped him see what his friend was up to…