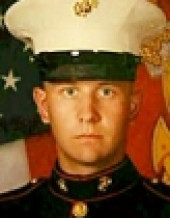 Luke often spoke with his family about his plans for a career in the military, it was a worry, but his family was very supportive. He was so excited to go into the Marines that he enlisted before high school graduation. On the day of his graduation ceremony, Luke Scott didn’t go home to celebrate this milestone in his life, instead he left immediately for boot camp. He was a man on a mission and nothing was holding him back.
Leaving his mother, Angie, and his family was difficult, but his anticipation on becoming a Marine kept him in the right direction headed toward Camp Lejeune, North Carolina. After military training he was assigned to 2nd Battalion, 6th Marine Regiment, 2nd Marine Division, II Marine Expeditionary Force at Camp Lejeune, North Carolina. The Scott family and two of his best friends, Colt and Clint Palmer, traveled to North Carolina for his military graduation. He was a Marine, his dream had came true.
Marine Lucas C. Scott received his orders and after a brief trip home to Peebles, Ohio, the young Marine was deployed to Helmand Province in Afghanistan. Operation Enduring Freedom was his mission. Luke kept in touch with family and friends as much as he possibly could. Whenever family missed a call home from Luke he left a message. He remembered birthdays and holidays; always letting everyone know his heart was still at home.
Bad news arrived one day when Marine Scott was hurt in a roadside bombing The Marine’s wounds healed and he returned to duty, Scott insisted to go back out on the line with his battle buddies. ..
On December 1, 2010, Marine Scott was injured again and was ordered to take time off. He insisted he was fine and wanted back out on patrol with his unit. Two days later he would return to his duty, but not before calling home letting his mother and family members know he was fine and going back to work. Angie Tipton, Luke’s mother, said to her son, “Luke, do you know how much I love you? I love you with all my heart.” Those were Angie’s last words to her son. …