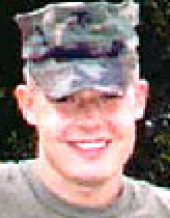 Dustin Fitzgerald was crazy about cars. In high school, he souped-up a 1996 Dodge Stratus and outfitted it with racing tires and a spoiler. And just four months before he entered the Marines, he bought his dream car – a 1997 Mitsubishi Eclipse. While he was stationed in the Middle East, “Dusty” would ask his mother Melody to buy car accessories so he would have them when he got home. He never did. The 22-year-old from suburban Huber Heights, Ohio, was killed Aug. 18 in a vehicle accident in Iraq. His mother said she was told the accident happened in Anbar province when the road gave way. He was based at Camp Lejeune, N.C. Fitzgerald enjoyed baseball, basketball and wrestling in high school and enrolled in the school ROTC program. He wanted to be a pilot in the Air Force, but came home one day and told his mother that he instead wanted to be a Marine. “He was very adventurous, wonderful sense of humor, easy-going,” his mother said. “Never had an enemy.”