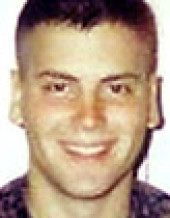 …Conte graduated from Field High School in 2003 and took classes at Maplewood Career Center School in Ravenna during his junior and senior years, said friend Naser Rizek, 22, of Brimfield.

Rizek said Conte was like a brother to him.
“If you were down, he would put you up,” said Rizek. “If you needed help, he would be there.”
Rizek said Conte joined the Navy in February 2004 and had changed during his first tour in Afghanistan.
“He was a completely different person,” Rizek said. “He just broke down and cried, and he really didn’t want to go to Iraq.”
“He wanted to go because he wanted to do for his country, but at the same time he didn’t want to go because he was scared,” Rizek said…
The Associated Press
…An aunt recalled how awestruck he was when he first saw New York City. An uncle talked about how he loved to fish in a pond near the family hunting camp. His babysitter remembered the young Matthew leaping from his school bus into her arms…