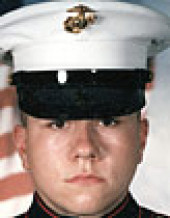 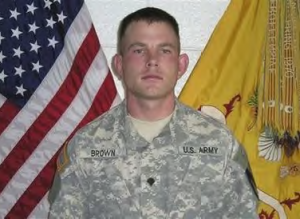 …Members of his family said they last saw him in December, when he came home for Christmas with his fiancée. He went to Iraq in early February.
“He volunteered to go to Iraq,” said Melody Roop, his mother, who lives in nearby Stow. “He did this because he wanted to fight for what he believed in. He was a very strong Marine. He believed in this war, and he wanted to fight for his country to help prevent any more 9-11’s from happening here.” Roop said she last spoke with him about 10 days ago by telephone. She now treasures a message he recently left on her answering machine, imitating Forrest Gump.
Kirk Brownfield, his father, said Andrew graduated from Akron North High School and worked at various jobs before joining the Marines. “He enjoyed it real well. He liked it more than he didn’t,” he said. “He was a good kid. Everybody was proud of him.”
His fiancée, Michell Hackworth, 21, of Highland, Calif., flew to Akron on Friday to be with Brownfield’s family. The couple planned to move to Ohio after Brownfield’s enlistment ended next January, she said. Brownfield volunteered to go to Iraq, Hackworth said. “He used to tell me he wanted a piece of the action,” …
North Principal Larry Weigel remembers Brownfield as “an average, go-to-school kind of kid. ”He said Brownfield was one of the first to participate in a training program that had students divide their days between school and studying a vocation “It’s very sad,” said Weigel…