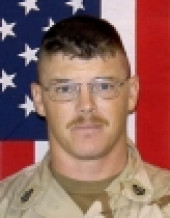 From the early days together, Lahna remembered Border was easy going and easy to talk to, but when it was time for football practice, he was ready to go.
“What I remember about him is he was more into helping people than he was about himself,” Lahna said. “He was a great team leader, a leader who led by example.”
Ridgewood football coach John Slusser said he had the privilege of being Border’s coach for six years, starting in junior high on the track team.
“I saw him grow up from a little boy into a man,” Slusser said. “He had a great heart. He was one of the best athletes I’ve coached in my 17 years there, not just because of his size and speed, but his attitude. Ray would do whatever it took to please you.” 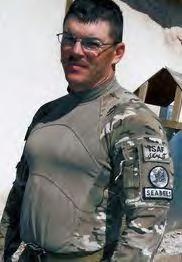 Border’s cousin Matt Nelson said the sailor was a role model for him, too.
“I didn’t have a big brother growing up. He was my older cousin, and we spent a lot of time with the family,” Nelson said. “He was an influence on me, especially when it came to wrestling. I remember my mom [Angie Border] was proud of him, and so I started wrestling when I was 6 years old.”
Border was a force on the Ridgewood football team and a state contender in wrestling. He also was into body building and entered competitions.
“I remember I wanted to grow up and be big like Ray,” Nelson said.
But he recalled other things about his cousin, too.
“He was one of the best people I’ve ever been around, a good man who always put other people before himself,” Nelson said.