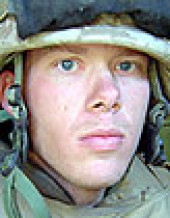 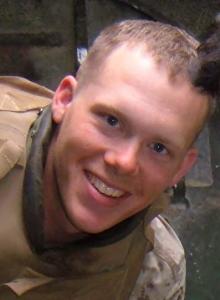 Timothy Michael Bell Jr. was a black-belt in judo who hoped to buy a motorcycle when he returned from his tour in Iraq in September. “My son was the last of the John Waynes, but tougher,” said his father, Timothy Michael Bell Sr.
Bell, 22, of West Chester, Ohio, died in an explosion Aug. 3 south of Hadithah. A 2003 high school graduate, he was based in Columbus.
He was a nephew of Kansas City Royals manager Buddy Bell and cousin of Buddy Bell’s son, David, who plays for the Philadelphia Phillies. He was a grandson of Gus Bell, Reds outfielder from 1953 to 1961.
Bell wanted to be a Marine since he was 6. His bedroom was filled with Marine posters and memorabilia. A camouflage Marine blanket even covered his bed.
When his parents took him to deploy for training with his unit, he had just one message for them, said his stepmother, Vivian Bell. “He just said, ‘This is what I was born to do,”’ she said.
Always protective of his three younger sisters, Bell joined the Marines in part because he wanted to protect them. “It’s very important for me that everybody knows that he did this for them,” the elder Bell said…