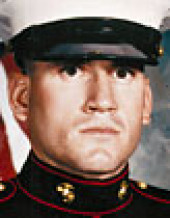 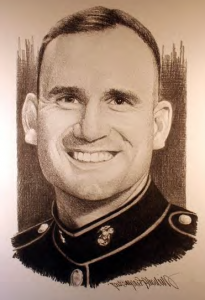 Lee Ann Ivy had her own way of saying goodbye to her husband, Marine Staff Sergeant Kendall H. Ivy II, during his funeral Friday morning. She sang to him.
In front of hundreds of mourners at the Cross Way Assembly of God, she faced her husband’s open casket and softly sang “Till I See You Again.”
A family friend said Lee Ann had sung to Kendall at the altar the day they were married.
“He was so devoted,” Lee Ann told mourners. “We had honesty and love. He was such a great father. All his greatest qualities are in his boys.”
It was his profession as a Marine that led him to his death while serving in Iraq.
“My husband was a ‘Grunt,’ ” she said. “He wouldn’t have it any other way. Grunts are special.”
Kendall H. Ivy II, 28, died May 11 in Iraq. He had served in the Marine Corps for 10 years and it was the Corps that brought him home to Galion earlier this week…
It was a Marine spokesman who told more than 300 mourners at the church that Sergeant Ivy was “a barrel-chested man who hated to lose, read his Bible and loved his kids. A good Marine. The best friend another Marine could have.”…
“When it came to sports, he was the first on the field and the last to leave,” his brother Kenneth Ivy, said. “He was a good man, as well as a good Marine. He made an impact on everyone he met.”…