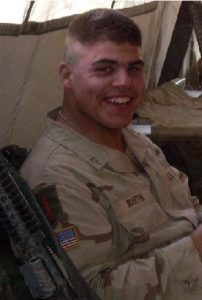 Ryan A. Martin forever changed Cassie Seevers life: He introduced her to her future husband. “I’ll always love him for that.” Seevers said. Both were attending the Knox County Career Center when Martin played Cupid for Cassie and Ryan Seevers. Martin studied carpentry with Ryan Seevers and often went out to a karaoke club with him for fun. Martin, 22, of Mount Vernon, Ohio, died Aug. 20 when his Humvee was hit by an explosive near Samarra. The youngest of three boys, he was stationed in Hamilton, Ohio. Martin worked at various jobs, including as a forklift operator and at a printing shop, before deciding to join the National Guard, where he seemed to have found his calling. When he came home for a two-week leave in August, Martin was somewhat reluctant to leave Iraq, said his stepmother, Jackie Martin. “He said he was looking forward to coming home, but when it came time to pack up, he didn’t want to leave his buddies.” she said. “He really made some good friendships and bonded with others while he was there.”…