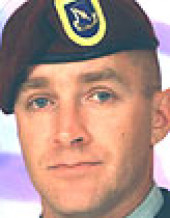 Spc. Michael K. Frank didn’t have to return to the Army. He already had served four years, but after Sept. 11, 2001, he wanted to go back and help. “The country was at war and he said, ‘I’ve got this training. I want to go do my part,’” Frank’s father, Timothy Frank, told the Associated Press…
Michael Frank died of injuries he suffered Thursday when a roadside bomb detonated near his Humvee in Baghdad. He was 36.
Michael Frank, of Great Falls, Mont., was a combat engineer assigned to the 1st Brigade Special Troops Battalion, 1st Brigade Combat Team, 82nd Airborne Division…
“He was extremely proud of what they were doing and what they were accomplishing over there,” said Timothy Frank, who is a civilian dentist at Malmstrom Air Force Base in Great Falls, Mont.
Frank was born in Texas and lived all over the United States. He joined the Army after graduating from Stevens High School in Rapid City, S.D., in 1989. After basic training, he was stationed in Hawaii, his father said.
After Frank’s first enlistment, he attended the University of Cincinnati, where he earned a bachelor’s degree in criminal justice. Frank worked as a private investigator and managed a restaurant in Cincinnati before re-enlisting in 2006.
“Specialist Frank was always very confident in every aspect of his life,” said Spc. Andrew Baker, Frank’s roommate at Fort Bragg. “No matter what the task, he always knew he could accomplish it to the highest standard. Many people have heard the phrase ‘Nothing is impossible,’ but Specialist Frank lived by the credos that ‘Impossible is nothing.’ He was always the first to lend a helping hand or take charge when others needed guidance.”