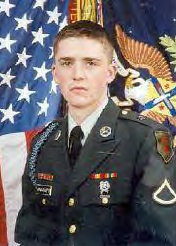 … A.J. was truly a great soldier–a courageous young man who put the safety of others above his own. We will never be able to repay A.J. for what he has done, and we will never be able to honor him the way he truly deserves. We can, however, remember this American hero as he was–as a strong, independent young man who did a great deal of good in this world.
In his all too brief 20 years, A.J. touched many lives. His mother, Chantil, fondly recalls that “everybody loved him.” It was his smile; it was hard to stay mad at him.” A.J.’s father, Allen, remembers that he was the kind of kid who could walk into a room and just light it up.
A.J. loved his family very much. In the summers, A.J. always looked forward to their family vacation to Myrtle Beach, SC. A.J. loved kids. Family friend, Kim Loveland, recalled that she would pay A.J. to watch her children, only to have him turn around and use the money to buy the kids candy.
A.J. went to Mansfield High School, where he played golf and baseball. He was known as a “good guy” who had a lot of good friends. After graduation in 2001, A.J. enlisted in the Army. He would eventually serve in Kosovo, Germany, Kuwait, and Iraq. Allen and Chantil Vandayburg treasure the picture they have of their son with children in Kosovo. Allen likes to call A.J. “a warrior who also had a soft side.”
A.J. was a lot like his father. Allen is a 25-year veteran of the Mansfield Police Department. A.J. learned from his dad the value of public service and how to trust your comrades–lessons he would bring with him overseas. A.J.’s parents knew that their son believed in what he was doing in Iraq. A.J. e-mailed them as often as he could and would tell them not to worry–that he trusted his fellow soldiers and knew they would look out for him. In his final battle, it was A.J. who paid the ultimate sacrifice for his comrades and for Iraqis he did not know…