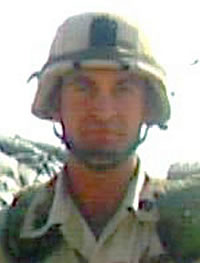 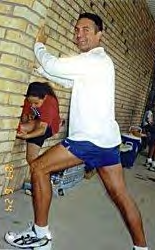 Master Sgt. Robert J. Dowdy, 38, of Cleveland, Ohio was one of eight soldiers found dead during the rescue of Pfc. Jessica Lynch, who was being held captive.
He was a member of Lynch’s unit, the Fort Bliss, Texas-based 507th Maintenance Company, which was ambushed near Nasiriyah on March 23, 2003. The unit was on a supply mission.
Dowdy followed his older brother into military service 18 years ago and was just two years from retirement. 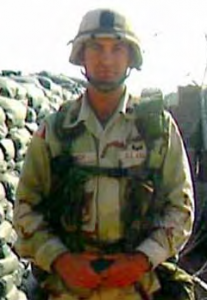 “He was dedicated to the military,” said his 40-year-old brother, Army Reserve Master Sgt. Jack Dowdy Jr. But the “biggest joy in his life” was his teenage daughter.
Dowdy enlisted in the Army after high school and served on bases in Korea and across the United States. He had fond memories of his first Army assignment, in Fort Polk, La., and had bought a house not far from the base, where he and his wife planned to retire.
In his last message from the Persian Gulf, Dowdy said he had been promoted in the field to first sergeant and was headed to Iraq. He prepared the family for the possibility that he might not return.