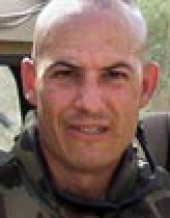 The next care package being prepared for Gregory J. Fester contained a pink and yellow, flower-shaped dog toy for a pup he had adopted. “I’d be talking on the phone and I’d hear him say, ‘Oh, hi, Snowball,”’ said his wife, Julie Fester. “It was like no dog I’d ever seen — white and straggly.” … The rest of the care package offered a picture of Fester: his three favorite magazines — National Geographic, Car & Driver and Popular Mechanics — and DVDs of the movie “Coach Carter” and the first two seasons of “Seinfeld.”

His wife also planned to send him a book of constellations. He loved the night sky and was always pointing out the Big and Little dippers. “He said the sky was so clear over there,” she said of Iraq. “You could see even more of the constellations.”
He attended Ohio State University and served in the Army for 8 1/2 years, including a stint in Operation Desert Storm, before taking a job in pharmaceutical sales at Pfizer Inc.

Dear Fester Family, … Greg spoke of you so often when he called on our office as a Pfizer Rep. When he spoke about his family it was evident that he loved you all! Greg always had a smile on his face and loved to “razz” one of doctors about him being a Buckeye because that doctor is a Wolverine. He loved to come in dressed in Marroon and Grey attire for lunch for the “Big Game”. All of us in our office are deeply sorry for your lost and know that our thoughts and prayers are with you all during this time and in the days to come. We will miss him terribly! ~ Sandra Cleveland, Sparta, Michigan