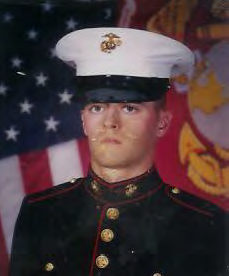 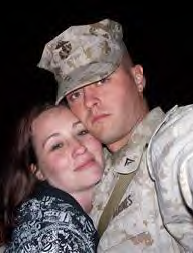 Kimple, 21, was among four Marines killed in an explosion set off by a roadside bomb Friday, said Lewis Taylor of Taylor Funeral Home in Amanda. The U.S. military has not yet released the details or confirmed the names of those killed.

The married father of three young children was based at Camp Pendleton in California and was on his second tour of duty in Iraq. He leaves behind his wife, Amber, and their two children, Drake J. and Maleah R. Kimple, all of Amanda, and his child Dominic J. Kimple of Carroll…

“He was a very bright young man, very intellectual. He loved to read,” said teacher Jan Hodge, who had him for two years in her Occupational Work Experience course, which provides career-minded students with a taste of working life…

“He wanted to get out of school to be in the military, and he chose the Marine Corps. I knew he would be successful,” Hodge said.

Kimple came to see his former teacher in November, when he was home on leave. He was dressed handsomely in his uniform and showed her pictures of his children. He was so proud of them.

“He knew he was going back,” Hodge said. “He wasn’t afraid. The Marine Corps was like a family to him.”

Bloom-Carroll Superintendent Roger Mace recalled Kimple as one of the brightest students he had met.

“When you saw James in the hall, you always saw him with a novel. He loved to read,” the superintendent said. “He always had a smile on his face.”…