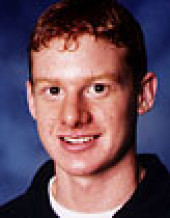 …Godwin returned to Iraq about a month ago. He served a previous tour there last year near the beginning of the war.
Godwin was a member of the Newark Bible Church and a 2001 graduate of Zanesville Christian School. He had two black belts in martial arts, played soccer and basketball and played trumpet in the high school band.
He planned marrying fiancée Andrea Mendenhall and going to college next year after his time in the Marines ended.
Friends remembered Godwin as a loving, caring individual who constantly looked out for others. “I think the thing that I remember the most about him was his ability to laugh in almost any situation,” said Austin Thompson, friend and fellow Zanesville Christian School graduate. “He always had a great sense of humor and he was also very loyal to his friends. He always looked out for them and loved to be with them.”
Lance Cpl. Dan Wills, a high school friend, agreed. “If somebody needed something, he would help them out if he could,” Wills said. “He was friends with just about everybody at our school.”
Nancy Wills, Dan’s mother, also remembered Godwin as a fun-loving youth. “He was so happy-go-lucky,” she said. “He was just a good kid — a good-hearted kid and a good friend.” “All he would want is for us to remember the good times we had with him and be proud — as he was to serve his country — that we had a friend who sacrificed everything for our freedom,” Thompson said. “I am happy and proud to say that Todd Godwin was my friend.” …