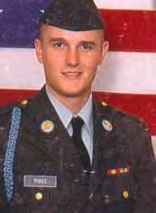 Obituary Published in the Columbus Dispatch… 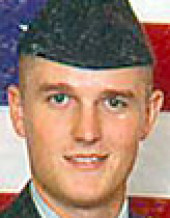 PRINCE Specialist Kevin William Prince, 22, State Route 19, Mount Gilead, was killed Saturday morning, April 23, 2005 while on patrol in a roadside bombing in Al Haswah, Iraq. Kevin was born July 13, 1982 in Canton to Ronald Robert and Susan J. (Martin) Prince, and was raised in Plain City, where he attended Jonathan Alder Schools. A soccer player since age five, Kevin also ran cross-country while in school, and worked part-time in his parents’ Plain City business: Main Street Bagel & Deli. Kevin was a quiet, loving son and brother, who loved playing video games and watching movies, and had recently developed a keen passion for reading. Sensing a need to change direction for his life, Kevin enlisted with the U.S. Army in 2001, with the purpose of heading to college. He was graduated from boot camp on October 11, 2002 at Fort Benning and headed to Fort Irwin, California to join the Army’s 2nd Division, 11th Armored Cavalry, nicknamed the Black Horse – Echo Troup. His group was responsible for training others in the Mohave Desert, to prepare them for Operation Freedom. Principally, Kevin was responsible for operating a Bradley transport, and was shipped to Iraq on January 9, 2005. Just before leaving, he communicated to his family that he had bought a Bible to take with him. An excellent marksman, Kevin was not one to complain – well, perhaps about sleep deprivation – but he was always up to a challenge. Kevin had a comic and irreverent side, part of his rascal nature, and was a bit of clotheshorse, too. Proud to be serving his country, Kevin just wanted to come home.