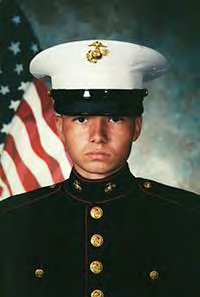 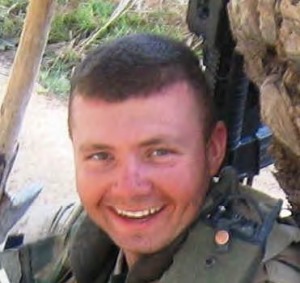 There is a sense of calm and serenity in the faces of Bob and Marla Derga. The father, who less than eight weeks ago lost his son, Marine Cpl. Dustin A. Derga, said he and Marla Derga, Dustin’s stepmother, are at peace. ..The Lake Township couple got word of his death on Mother’s Day and have since made peace with the news. “I realized that he was home safe, with God, the ultimate home,” said the 50-year-old father, who moved to Stark County with his wife in fall 2003.
Dustin Derga, who worked for Columbus Processing as a steelworker in Columbus before being deployed in Iraq, dreamed of starting a bar with some friends in Florida when he got home. He had been a firefighter with the Basil Joint Fire Districts in Fairfield County and was with the Marine’s Lima Company out of Columbus, a unit that was called up at the same time in January as Akron’s Marine Reserve unit, known as Weapons Company. Both units are part of the 3rd Marine Battalion, 25th Marine Regiment, 4th Division…
Bob and Marla Derga said they gave Dustin a Bible and an MP3 player at Christmas, along with an MP3 file of the New Testament. They hoped he would read the Bible in Iraq. From conversations with people who had spoken with Dustin when he was in Iraq, they believe he had been reading it…