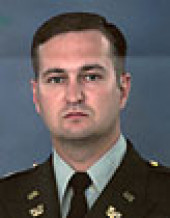 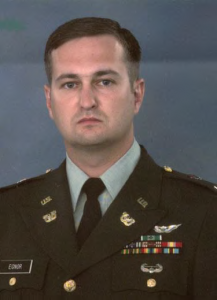 …Rather than dwell on their son’s death, Roger and Margaret remember the good times.
“I have 32 years of happy memories with Jody,” Roger said.
He coached Jody’s baseball teams for 10 years, starting when his son was 6. Three years ago, when Jody was on leave from the Army, they put a new roof on the Liberty Township house. Every time they parted, father and son said: “I love you.”
“Nothing can change those memories,” Roger said. “Or take them away from me.”
The war on terrorism took Jody away from his parents. His Army Chinook helicopter caught on fire February 22, 2002, during a pre-dawn, anti-terrorism mission in the Philippines. …

“Jody, I owe you more than unfortunately you will never know. As my 1st Squad leader in the land of 100 smells, you were what I inspired to be as a young SPC coming up through the ranks. Thank you for your service and your friendship brother..” 1SG Mike Thayer of Brunswick, OH
I went to flight school with Jody and we became great friends in WOC school. He was a great guy and was loved by all in our class. I remember meeting his wife at our graduation from WOC school, but I don’t remember your name. My sympathy goes out to the family for losing Jody, and I hope to remember him often. ~ Rick Cote, Dolgeville, New York
Courtesy of the Fallen Feather Project
Joseph J. Ellis
Ashland, Ohio
www.arlingtoncemetery