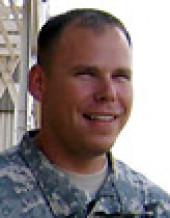 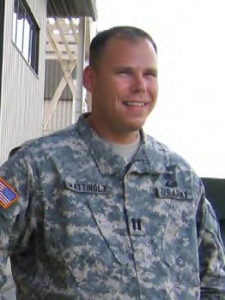 “Hey Sir. Sgt Luna here just wanted to say can’t stop thinking about the last time I talked to you in Kuwait. When you told me you had your command of a Troop and how you were going to get married when the deployment was over. I still remember the football games in Hood and the barbecues in Hawaii. Well sir hope you open the gates for me when I get there. Sgt Luna Alpha Company Renegades 1-25 Avn Hawaii. Cya later Renegade 26 Acft 94-00156.” ~ Richard Luna, Hacienda Heights, California

“I was Matt’s roommate at XU our freshman year in 1994. Matt always had me laughing with his antics; but, I also got to see his serious, intelligent and passionate side which continued to mature after college. I keep his obituary on my desk as a reminder of such a costly price and how close the war has hit home. I once read that ‘Honor is the presence of God in man’. Matt lived a rich life under that quote. Thanks for your sacrifice, man.” ~ Michael Brisendine, Columbus, Ohio

“I attend the United States Military Academy and was doing an assignment where i had to make a time line of events that have shaped my life. I started writing about one night when my mother called me and asked me to sit down. It was the night i was told matt was killed.

I knew Matt through my father. My dad introduced me to him and I started mowing Matt’s lawn for him every saturday for a couple of months. I never really mowed his lawn because before I could finish matt would always throw a basketball at me and we would play for hours after that. Matt became a mentor of mine, and he inspired me to go after a west point or ROTC scholarship. He even sat down and helped me fill out my registration forms.

I didn’t know matt very long, but his life influenced mine greatly. To those who knew him well and loved him I pray that you all know that his good deeds are still evident today. I will never forget him and send my love to his family.” ~ John Moffett, West Point, New York