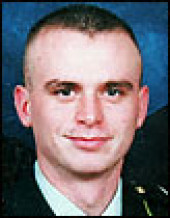 Joseph M. Garmback Jr. was a family man who wanted to follow in the steps of his paratrooper father. “He was a good son. He was a good brother. He had a lot of fun” said his mother, Marlyon Garmback. Garmback Jr., 24, of Cleveland, was killed July 8, one of five soldiers killed when the Iraqi National Guard headquarters was attacked in Baghdad. He was based in Schweinfurt, Germany. As a civilian, Garmback worked as a cook and ran parties for a catering company owned by Bill Rini. “Joe was a very kind, compassionate kid who worked for everything he got” Rini said. Rini introduced Garmback to his best friend, Army Sgt. James Mauer, a recruiter. When Garmback told Mauer he wanted to join the Army, Mauer helped the high school dropout get his diploma at night so he could qualify. “This was his dream. That’s what he wanted to do. He was going to be a lifer. That was the way he would have wanted to die”; Rini said. Garmback is survived by his parents, Joseph Sr. and Marlyon.