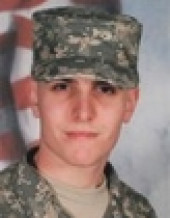 As a kid growing up in central Ohio, Zach Myers got into a lot of mischief with his best friend, Jeffrey Naples.
“From playing in the mud behind our houses to shocking ourselves on a car battery to see if it has a charge and everything between,” Naples wrote in an online post.
After spending time in the Army, Myers changed — for the better, said Heather Betts, another friend.
“When he was in high school he didn’t care about life or anything, but he joined the service and his feelings changed,” Betts said. “He cared.”
Myers, 21, of Delaware, Ohio, died Sept. 8 after the vehicle he was in was bombed in Baji, Iraq. He was assigned to Fort Richardson, Alaska.
Myers, a 2006 graduate of Delaware Hayes (Ohio) High School, was a husband and father. He leaves behind his wife, Megan, and his 15-month-old daughter, Rowen.
Friends said they were proud of him for his growth and for serving their country.
“I’m going to miss you a lot!” Naples wrote. “You did your job and you did it well! Unfortunately you had to depart, but with honor.”