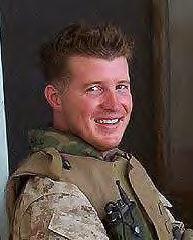 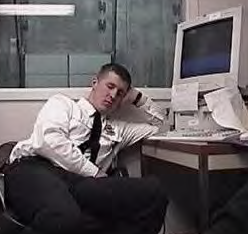 Justin F. Hoffman’s mom chuckled at his quirks: the playful voicemail messages left on her cell phone, the endless AOL Instant Messenger chats, his curious ability to eat mealworms at pet shops.
“Justin was more or less a reality show,” Carole Hoffman said. Hoffman, 27, of Delaware, Ohio, died Aug. 3 during combat operations south of Hadithah. He was based in Columbus.
His father, Robert Hoffman, said Justin was bright — an Ohio State University graduate who worked in information systems at Cardinal Health — but was big and strong and needed an outlet for his energy.

After six years, his time in the Marine Reserves was up last year, but when he learned his unit was to be activated, he signed up again.
“He wanted to be there for his men,” Carole said. “He wanted to lead his men.”
Lately, he had enlisted family members to scout for a diamond ring.
“He teased about proposing as soon as he got off the plane,” said his girlfriend, Teri Price. “I can’t imagine my future without him. I loved him more than anything.”
Justin’s younger brother, Tyler, said, “He was a great brother and more than that he was a great friend.”